On this category page you will find the selection possibilities for the La Cimbali espresso machines.

The company was founded in 1912 in Milan by Giuseppe Cimbali, at that time the company was specialized in the manufacturing of copper products. The first colm coffee machine Cimbali made was called the Rapida. The column type of coffee machines before the end of the second world war a common model.

After the 2nd world war La Cimbali also started to manufacture lever espresso machines, which was a new invention at that time. Models Like the La Cimbali Ala La Cimbali Gioiello and The La Cimbali Brillante. During the mid 50’s la cimbali launched their new petented hydraulic group, which created more automation in the brewing process.

On the parts category page you can make a selection based on a parts category. Like Filterbaskets, flowmeters, heating elements, inlet valves, electrics and a lot more.

If you are unable to find the parts your looking for just let us know and we might be able to help. 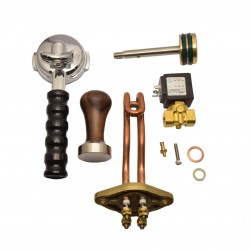