What kind of knock boxes are available? 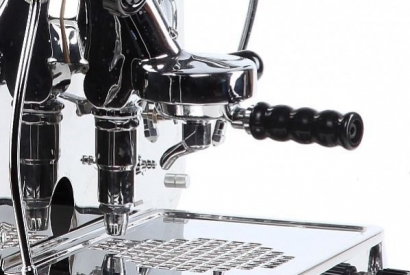 Difference between a lever and a pump driven espresso machine


Let´s start with the principles of a lever brew group and  a pump-driven brew group.

With some espresso machines, like the early Gaggia and Victoria Arduino espresso machines, the piston is a smooth cylinder and the gaskets are located inside the body of the brew group. At the moment, however, there isn’t any manufacturer which still produces the wall gasket type of brew groups.

When the piston is in the up position the water will flow out of the boiler (which happens due to boiler pressure) into the brew group. When you raise the lever, the piston will close off the boiler and force the water through the coffee. How fast the lever will go up depends on the fineness of the coffee and the amount of force used to compact it.

The invention of the pump-driven machine took place almost 15 years later with the famous Faema E61, which is still a classic machine to this day. The style of the E61 brew group style is still the most popular brew group of modern household and commercial espresso machines. In this text, we talk about the basic pump driven espresso machines, not the high-end machines.

There are two different types of pump-driven machines, manually and electronically controlled machines.

The manually controlled machines work with the lever principle of the E61 brew groups.

When the lever is in the lowered position, a cam opens the upper valve part and a microswitch is turned on to operate the internal or external motor. The water then exits the brew group at a pre-set pump pressure.

When the cam is in the raised position, the upper valve closes and the lower drain valve opens. At the same moment, the pump stops as soon as the microswitch is switched off again.

The electronically controlled brew groups (on/off without timer) work slightly different but the principle is the same. When you push the button to start the brewing process the following things will happen:

So, is there a difference between a lever machine and a pump machine? Yes, there is.

One of the most important things is practicing. Making espresso with a lever espresso machine takes a lot more trial and error. What is the correct setting of the regulator screw? How long to pre-infuse the coffee (hold the lever in the lowered position, so the water can flow out of the boiler)?

On the other hand, is making a good espresso with a pump-driven espresso machine easy if you don’t have any experience? Sorry, no. Pump-driven machines also require a lot of practice. Some machines allow you to pre-infuse, but not all. Compared to a lever machine, you can easily adjust the brewing pressure. It is more difficult to adjust the pre-infusion because the flow regulator is fixed on most machines.

Whether a lever espresso machine is better than a pump machine depends on the attitude of the person using it. It depends on the user. The four key elements for a good espresso are the coffee quality, the water quality, the consistency of the grinder and the experience of the person making the espresso. In conclusion, we can say that if you have the most expensive espresso machine that you can buy, the end product will be unsatisfactory if you use poor-quality coffee or the other key elements are not performing in the best way.